Language:
Currency :
0 item - $0.00
Home>Self-development>Jesus is NOT Your Savior

Jesus is NOT Your Savior

In Self-development
By Rana Sabeh 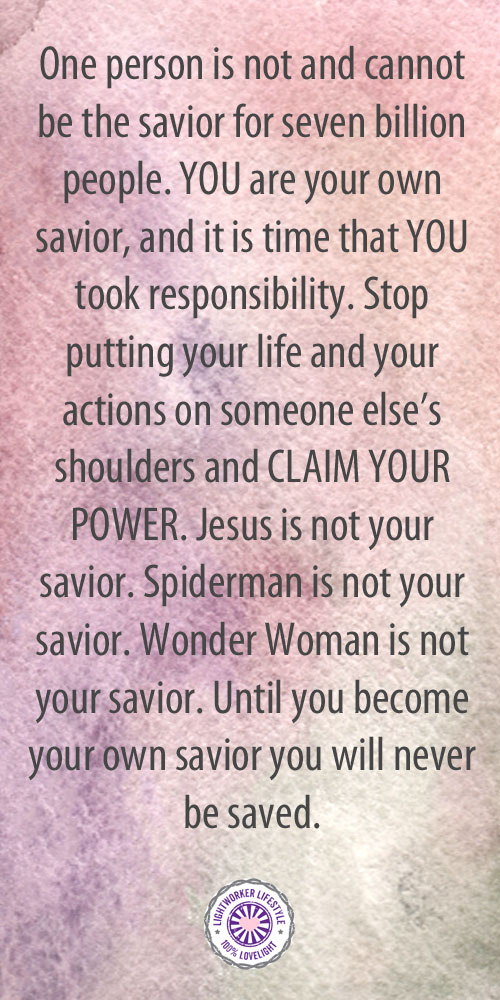 The concept of one person or a few people saving all of humanity is prolific in our world. Whether it’s Jesus or the Justice League, humanity has for too long placed their salvation on the shoulders of others. It amazes me how many superheroes have been created (I get that nowadays it’s about money too) but in the beginning they were created out of people’s feelings of powerlessness to change the world or their own world even. I get it, I felt that way too before I was awakened and activated and began the process of turning my attention away from this world and back to God and the Higher Realms. But we are NOT powerless and ultimately each person MUST save themself because no one else is going to do it for you. Jesus cannot save everyone. It’s not his job to do it for you. He did his own internal self-development work because he was human and he had the veil of amnesia like the rest of us so he had to climb his way back up the ladder too. This process that we are all going through right now, this awakening and shifting and vibration raising and shadow healing, it’s all happening because of Cosmic Decree that it is time for the people of Earth to stop stagnating in their evolution and move forward in the Light. Earth is holding back the rest of our solar system from Ascending and enough is enough. It’s uncomfortable and it hurts and it sucks but if you do not take responsibility for your own salvation you will only cause more suffering for yourself. You can not believe a word I say and call me crazy, you can resist kicking and screaming and make excuses and let your ego tell you it’s too hard and that you can’t do it and in doing that all you are doing is creating more karma for yourself and digging an even deeper hole that you will have to dig yourself out of eventually in another incarnation or two, or 10 or 100. Because one day you WILL have to save yourself.  ❤

18. IF I DO NOT GO (ascend) THE COMFORTER WILL NOT COME
Jesus realized that even his dearest disciples and followers were merely allowing the tendencies of human nature to act as they leaned on His power, rather than developing their own Christ nature. Close proximity to the Ascended Host does not mean that anyone should expect the Ascended Ones to do things for them, but that, by the power of radiation the unascended one may be stimulated to use his own God-given powers to be able to do things for himself.
– Ascended Master El Morya
Excerpted from “The Challenge of the Christ”, page 22 pathofthemiddleway.org

“…As I have hinted, the real key to salvation is not membership of an outer church but that you attain Christ consciousness, which is the only thing that can give you entry to the spiritual realm. That is why I said:

Contrary to popular interpretations, I did not speak these words as a historical person. I spoke them in oneness with the Christ mind, and thus it is the universal Christ consciousness that is the only way to reach the Father and his kingdom. The main message of my mission was to set forth an example that all can follow, for, truly, all people have the potential to attain the Christ consciousness.”

And from page 56: “I gave my life to bring forth the truth that salvation is an internal process, yet the very church that claims to represent me on Earth has done everything in its power to nullify my sacrifice.”

From page 59: “Let me ask you to consider a few logical questions:

Do you think that I am come to save you by doing all the work for you, or do you think you have to do your part?

Do you think the salvation I offer is automatic, or do you think you have to live up to certain conditions in order to be saved?

Do you think salvation is an outer process – you fulfill outer requirements and are allowed into an external kingdom – or do you think it is an inner process, whereby you go through a transformation of consciousness?

If you have been brought up in a mainstream Christian church, you have been conditioned to believe in the external, passive salvation. Yet let me contrast that image with the reality of my own words.”

– Ascended Master Jesus
Excerpted from “Master Keys to Personal Christhood” available as an ebook at More to Life Publishing.

You Really Do Create Your Own Reality! By Rana Sabeh

Your Triggers May be Returning Karma By Rana Sabeh

Epigenetics – YOU Are in Control of Your Health By Rana Sabeh

What Do You Focus on – Divinity or Humanity? By Rana Sabeh