Blessing of the Day: Meals By Rana Sabeh 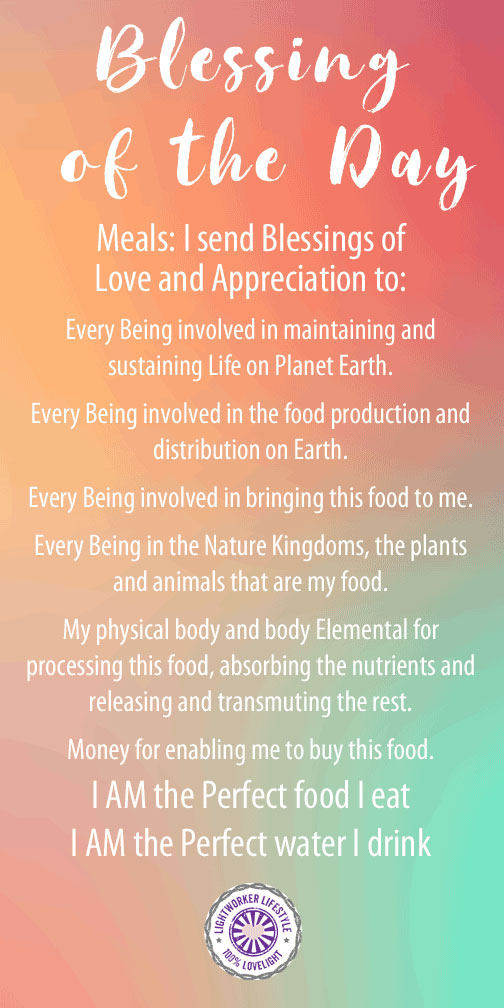 There are millions of people that don’t have enough to eat every day so I know how fortunate I AM to have food abundance. I AM thankful to be able to eat whatever I want whenever I want and to have such easy access it enables the easy life of convenience that I enjoy.

I’m also aware of how much work goes into producing and distributing all of this food, and how many Beings are involved, human and non-human. It takes an incredible amount of energy to maintain a planet of 3D physical density. So now I make a point to remember to send Blessings of Love and appreciation to all I can think of related to everything I eat and drink. I don’t remember every single time but pretty close, especially if it’s really tasty and makes me even more thankful. ?

Blessing of the Day: Every Aspect of Myself By Rana Sabeh 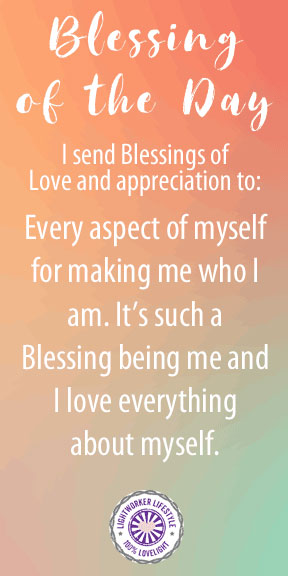 One of my favorite things to do is sit in contemplation and think. I think about what I’ve learned, which usually results with me asking more questions because there’s so much I don’t know. SO MUCH! I sit and think about the other personalities/incarnations my soul has created and how much work they did to get my consciousness to the level I’m at in this life, how I am the physical expression of my Mighty I AM Presence, that my Holy Christ Self is the energy transformer between me (my Conscious Self) and my I AM Presence and how many other aspects of me exist in higher dimensions that I don’t even know about. I was told by someone in 2015 that my soul is a Bodhisattva soul, which means it has chosen the direct path to enlightenment – which is faster and more difficult than the slower spiral path – and that makes total sense when I reflect on my life and where I am now.

I am constantly in wonder and awe every time I learn something new and when I contemplate the wonderous, magnificent creation I’m a part of. I’m thankful to know what I know and am enjoying this magic carpet ride of exploration and re-discovery of myself. I’m so thankful to have reached this glorious state of consciousness where I adore, treasure and truly Love every single aspect of my Being as an expression of Divine Source. I Love who I AM now and who I AM becoming. And I hope that one day you will join me if you aren’t already here with me now. Many Blessings of Love to you all. ?

Blessing of the Day: Sand Paper By Rana Sabeh

When I sit in contemplation and think about my parents, ex-boyfriends, and all of the people that have been in my life, I thank them for the contribution they have made in any way to shaping me, sculpting me and sandblasting me to become the person I am today. My analogy is sand paper. The people in my life briefly or outer acquaintances I call fine grit – they did a little shaping and it was relatively painless. Next are the people in my life longer or that are closer to me who do a little more sculpting, they remove more than just the outer layer and it hurts a little more – I call them medium grit. Finally, the grand poobah of sand paper, coarse grit. This special level is reserved for family and those other dear people who trigger you to no end. They sandblast the shit out of you with high powered sanders and just when you think you’re shiny and perfect bam! they hit you with another spray of sand.

If you are able to pull back, go within and recognize that these dear souls are the treasure in your life providing an immense service to your evolution and growth you would begin to see them not as thorns in your side but as glorious opportunities to heal returning karma and transcend the human limitations keeping you stuck on your Ascension path. You know that before we all incarnated together we made contracts with each other to help us all grow and evolve more in each lifetime. So if you are resistant to seeing the value they bring to your life and refuse to learn from every interaction, if you refuse to expand your capacity and go beyond your comfort zone you will have to experience these trigger people over and over and over until you get it. Until they bring you to your knees in surrender. They WILL break your ego shield eventually so the question is: how much suffering do you choose to put yourself through?

Blessing of the Day: My Cat By Rana Sabeh 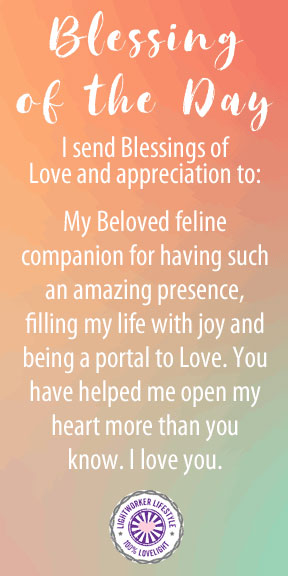 I’ve always loved animals; as a kid growing up my brother and I had lots of cats that we adored. But it wasn’t until I adopted my current cat Jammie **correction – SHE adopted ME** that I realized just how special a furry companion can be. From the first day I took her home, she has proven to be a very special Being indeed. That very first day, I had the cat carrier on my lap in the car and I opened the top to look at her and – this is going to sound VERY weird and cheesy for non animal people – but we locked eyes and something just clicked. It was like we were instantly bonded in that moment and forever. I have never been able to actually explain in words because it’s a feeling beyond words, unexplainable, you just have to feel it for yourself.

Through all the years we’ve been together she has been my constant companion through four moves, one ex-boyfriend and his Precious furry canine companion (whom he also had a special bond with, she’s now passed on) and many new adventures. Jammie is the most self-aware cat I’ve ever encountered, more than the other two cats who have also agreed to live their lives with me right now. I feel like she’s my counterpart because she walks alone too, apart from the other cats, and her consciousness is far ahead of theirs too. She has helped me grow and expand my capacity to generate Love. And my Love for her is helping her grow too. Like St. Francis of Assisi.

As other pet parents will attest, sometimes you forget they’re animals because they act so much like humans – they eat human food (Jammie eats corn on the cob, avocado, coconut oil and other human foods) they talk back – sometimes you even have conversations (oh is that just our crazy?), they listen (when they want), they comfort you, but unlike humans, they Love you no matter what. They are Beings of pure Love. The unconditional Love and Adoration you receive from an animal is a treasure beyond words. Sometimes I Love Jammie so much my heart is bursting wide open. Ask me a year ago if I would be devastated if she passed on and left me and I would say YES! my life would be so affected. But now as I progress on my Ascension path and learn the art of detachment, I turn my attention upwards and believe that as I’ve filled my heart with Love and Adoration for My I AM Presence and the Beings from Above that I will be ok when she moves up in her evolution. She said she’ll give me two more years and I’ll take it! But as I live in the Present here and now, when she’s out of sight she’ll be out of mind and that’s how it should be. I love her with all my heart now and when she’s gone I won’t look back.