In Manifesting Money
By Rana Sabeh 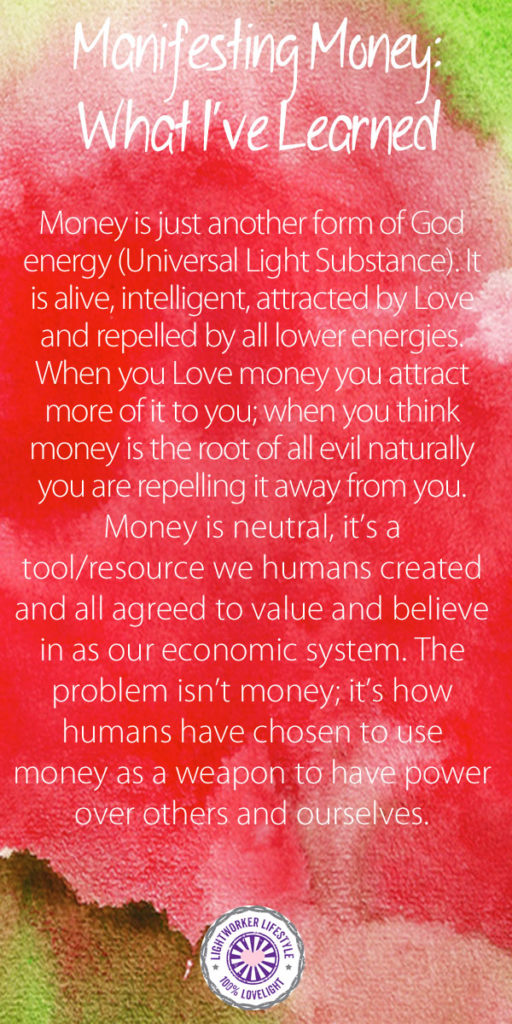 When I first learned about the Law of Attraction I learned about the concept of money being energy. Then last year I discovered Ascended Master Teachings and my study went much more in depth. I read a booklet from the Bridge to Freedom called “Electrons” and it changed my entire perspective on life. I learned that everything in all of creation is made of tiny, intelligent, conscious Beings with free will called Universal Light Substance (science calls them electrons). I learned that Love is the glue that literally holds this Universe together. Love is the foundation of the Law of Attraction, it’s the attractive force of everything good.

Money is Universal Light Substance, which is created and released from the Heart of God. People that Love money naturally attract more of it to them – even if they may not be outwardly spiritual and seem ego-focused – that doesn’t matter because money doesn’t sit and judge. It only responds to the energy of the person and that determines whether you attract or repel these precious Beings into your life in the form of money.

So if you want more money in your life you need to do your inside work and clear out any thoughts, feelings and beliefs that are repelling money plus more invisible stuff like, soul contracts/agreements, vows of poverty, etc. It can/will be a long process because everyone is on their own path and has their own shit to heal and release; it has taken me years of self-development and spiritual seeking to reach a place of understanding and I finally get it. Until I learn more….. 🙂

Affirmation of the Day – Wealth By Rana Sabeh

Manifesting Money What I’ve Learned: Your Feeling About Giving By Rana Sabeh

Manifesting Money What I’ve Learned: I Can Buy Whatever I Want By Rana Sabeh

Any cookies that may not be particularly necessary for the website to function and is used specifically to collect user personal data via analytics, ads, other embedded contents are termed as non-necessary cookies. It is mandatory to procure user consent prior to running these cookies on your website.

Send this to a friend