In Invocations and Decrees
By Rana Sabeh 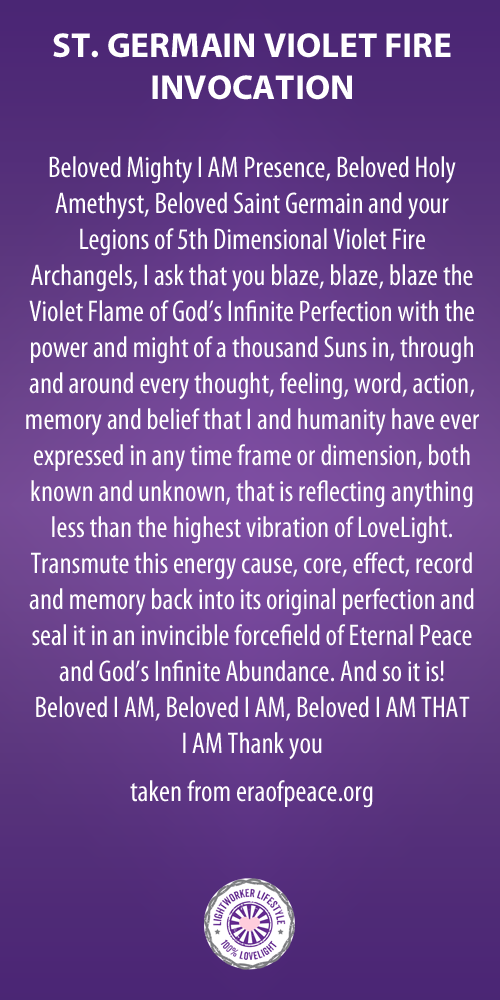 I first learned about the Violet Flame in August, 2017 when I discovered the Ascended Master Teachings. Before then I had never spoken decrees or invocations and I really took to calling forth the Sacred Fire with no disbelief or hesitation. The Sacred Fire is the Activity of God – there are 12 Rays of Deity, the Violet Flame of Transmutation is the 7th. The Violet Flame clears the energy trapped in your field through your misuse of energy – anything negative that causes discord, even mild dislike. I give this decree at least six times a day – it’s so short and when you give it fast it increases the vibratory action and makes you feel it more, at least it does with me. Plus it’s fun visualizing the flame as a mighty bonfire flowing through me, purifying my darkness into light.

Patricia Cota-Robles gives a much more in-depth description of the Violet Flame on her website eraofpeace.com.

“The Beings of Light in the Realms of Illumined Truth have revealed that in this year of 2012,  through the unified efforts of awakening Humanity and the Company of Heaven, we have reached a critical mass of collective consciousness that is allowing the Earth to receive higher and infinitely more powerful frequencies of the Violet Flame than we have ever been able to withstand. This Sacred Fire is known in the Realms of Cause as the 5th-Dimensional Solar Violet Flame of God’s Infinite Perfection.

The Company of Heaven said this frequency of the Violet Flame has the ability to transmute lifetimes worth of our misqualified energy in “the twinkling of an eye.”  That is wonderful, because we are in the midst of the greatest purging and cleansing process the world has ever known. As Humanity awakens and the Light of God increases on Earth, everything that conflicts with God’s Light is being pushed to the surface to be healed and transmuted back into Light. Even the inclement weather conditions are a reflection of Humanity’s consciousness and are designed by the Elemental Kingdom to purge the body of Mother Earth of the atrocities Humanity has inflicted upon her through ignorance, greed, and the appalling abuse of power.”

A Positive Opportunity Regarding Coronavirus By Rana Sabeh

The Great Invocation By Rana Sabeh